In this day and age, recording your screen and audio can be a lifeline in just about any situation. From creating tutorial videos, reporting bugs and errors to IT, conveying large pieces of information to collaborators, to even recording gameplay. So it’s no surprise that screen recorder apps are a must-have on every computer, including those with Linux operating systems.

It’s no secret that Linux users tend to get the short, more complicated end of the stick when it comes to popular apps and knowing which are best. That’s why we put together this list of the 10 best Linux screen recorders this year and how to install them on Ubuntu. Enjoy! ScreenRec is a small but mighty screen recorder that makes Linux screen capturing incredibly easy. This little app comes with both snipping tools for linux and screen recorder tools. The interface is remarkably simplistic—you only have to press Alt – S to start recording.

But it is the instant link sharing and top-notch security features that makce this both a great desktop recorder and laptop screen recorder for Linux users. Not to mention that you get 2Gbs of private cloud storage and it’s all free.

If you’re looking for something quick and easy without special features or bells and whistles, Kazam is for you. This simple screen recorder also comes with a screenshot utility which is very handy. It completely does away with exciting additions and leaves behind a few simple options such as delayed recording availability, audio input options, and capture region selection. 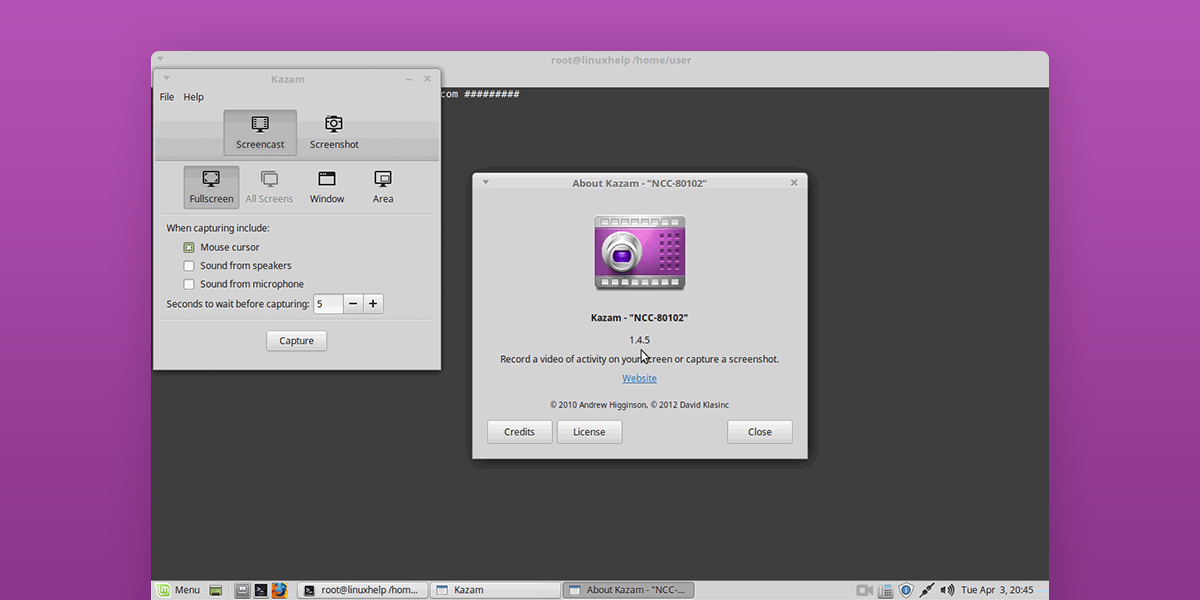 Enter the following code in a terminal window…

SimpleScreenRecorder is like the Old Faithful of Ubuntu screen recorders. It doesn’t have any new, futuristic features but it never fails to perform its basic task, even on slow-moving computers. Giving you multiple configuration settings, you can tweak this screen video recorder to meet your capturing needs. This includes changing the video output format, showing your mouse clicks and selecting the area to grab.

Written in Java, ScreenStudio gives you a simple interface with modern features. This app keeps things nice and easy. It allows only a few configurations like output options, frame rate/bitrate settings, and streaming options. 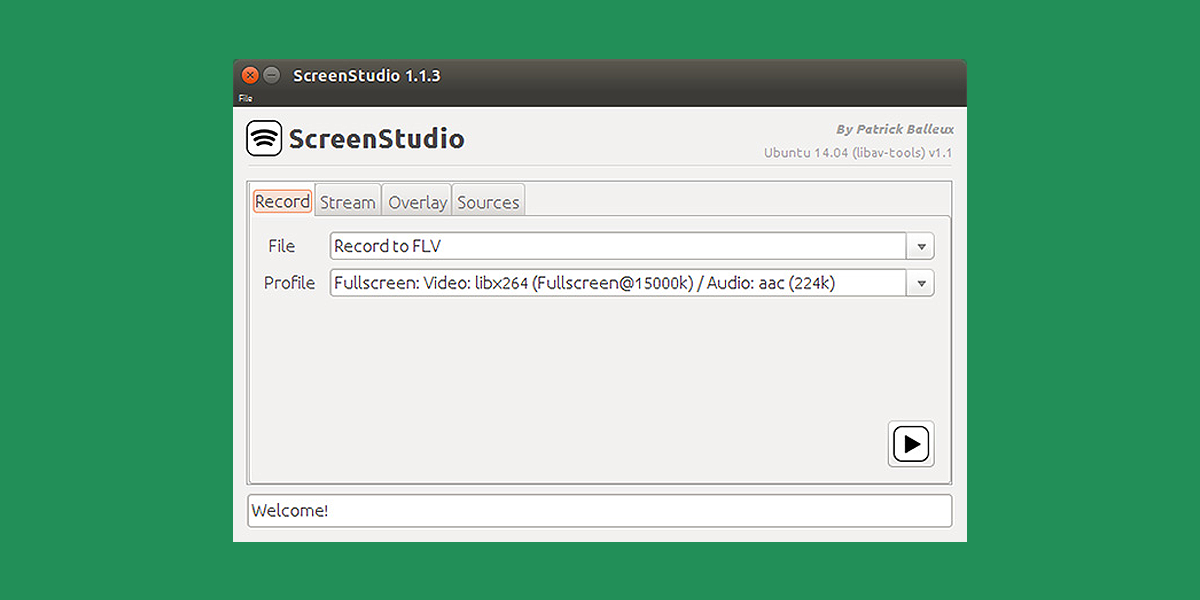 Enter the following code in a terminal window…

Using OBS is like bringing out the big guns. This app is not for the faint of heart. This open-source software puts you in full control while using Linux to screen capture video.

There’s a seemingly unlimited number of configurations you can manipulate. This includes scene creation, audio and video mixing, even advanced screenshot editing. Approach with caution, however, as OBS is complex and requires the climbing of a rather steep learning curve. 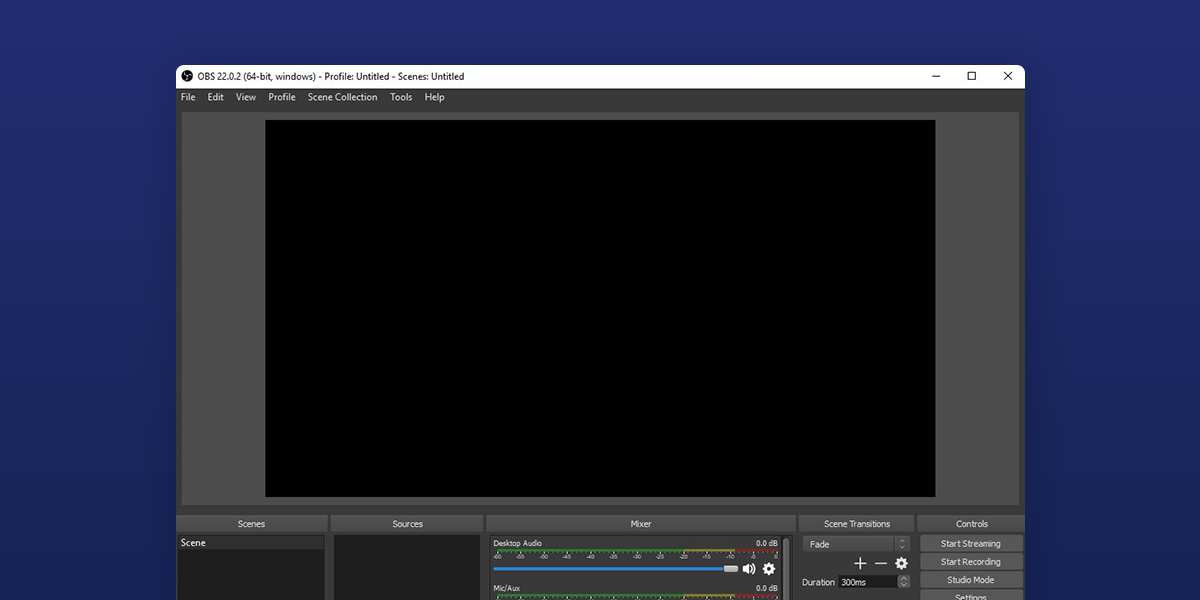 GreenRecorder is the OG in using Ubuntu to screen capture video. It’s one of the first (and fewest) desktop video recorders to offer support for Xorg and Wayland. GreenRecorder has all your basic desktop recorder features with the added bonus of gig options. Built using GTK3, the interface is simple and easy to navigate. 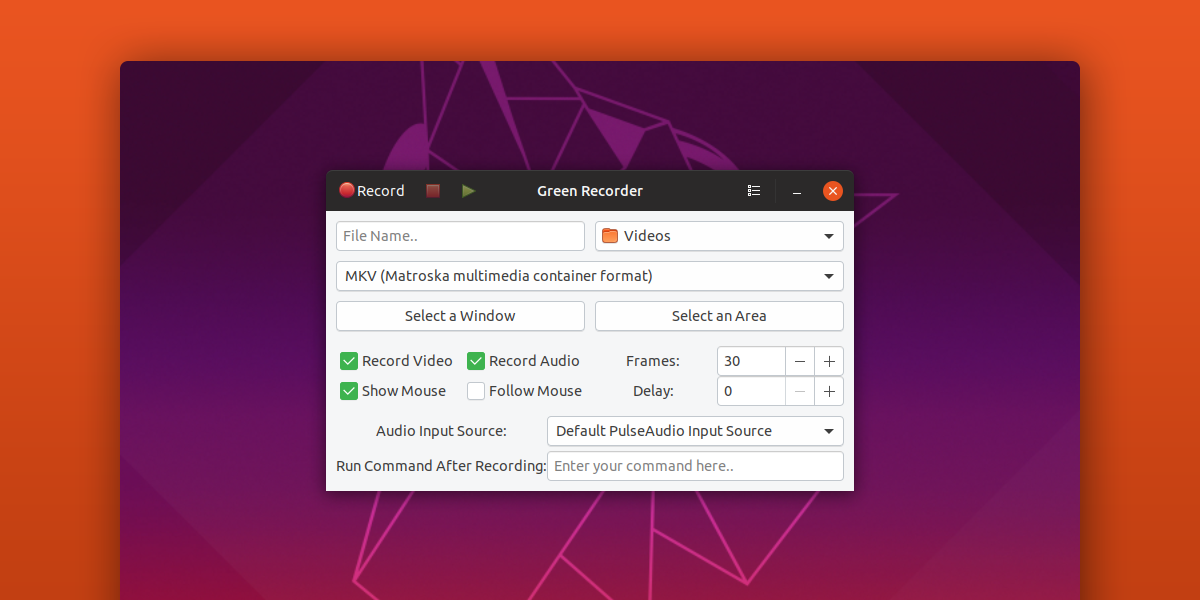 RecordMyDesktop is a command-line app used in Ubuntu to record screen video and audio. For those that like options, recordMyDesktop offers two different graphical user interfaces based on GTK and QT4. This app is a good option for tutorial videos as you can sync video with audio and highlight parts of the video that you deem important.

8. Vokoscreen: Best of the Basics

Vokoscreen is another insanely easy screen recorder for Linux. With a clean and basic interface, users can easily navigate its minimal options and features. 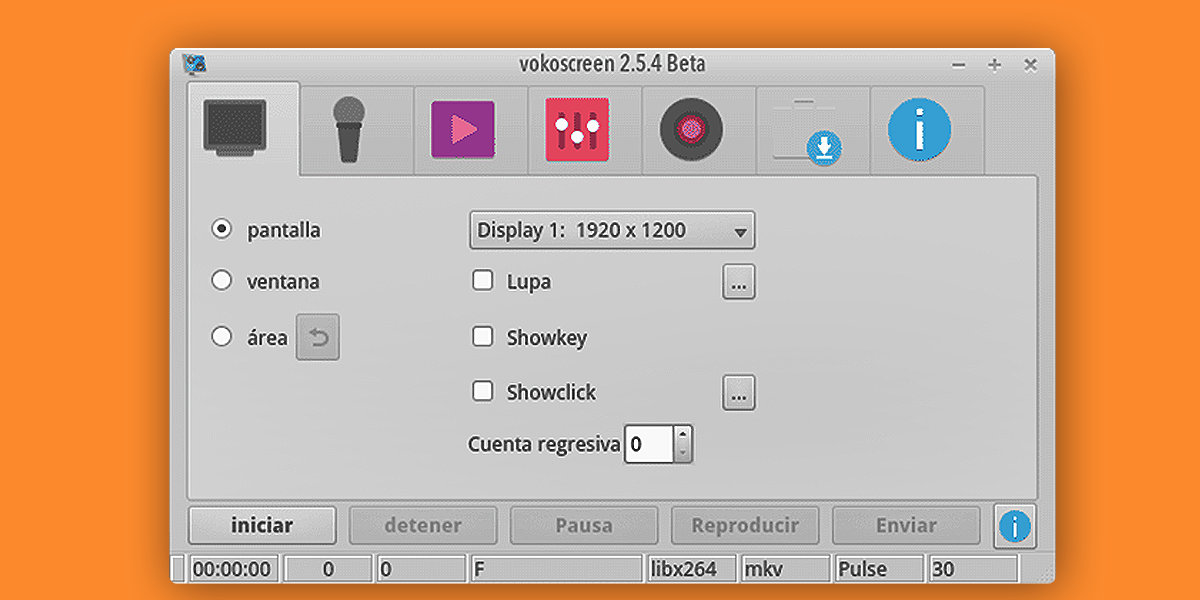 Freeseer goes a bit beyond your typical screen capture tool. This cross-platform app both records and streams your computer screen. It’s great for recording conferences and other online presentations. 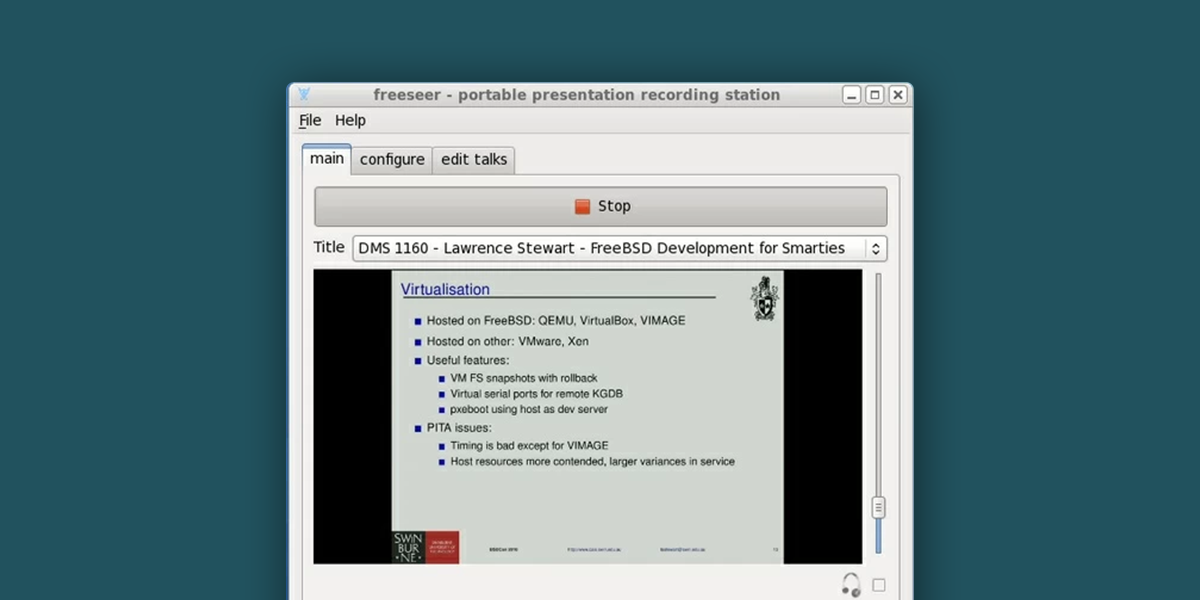 While Wink allows you to use Linux to capture streaming video, it’s more suited as an all-in-one presentation creator. With advanced editing features, this app ensures that your presentations or tutorials look professionally created. 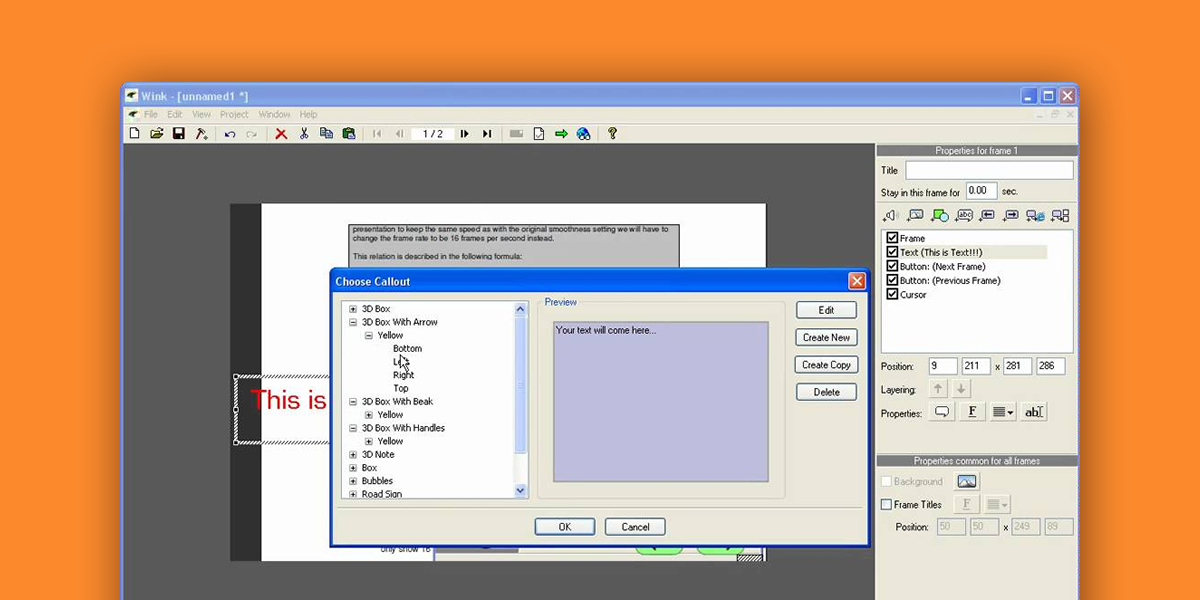 Using Ubuntu to record screen video and audio is no longer difficult to do. With powerful Linux screen recorders like ScreenRec and presentation boosters like Freeseer, your live streams, tutorials, and video emails are sure to give 2019 a run for its money.

How do I record my screen in Ubuntu?

Believe it or not, Gnome has a built-in screen recorder. Unfortunately, however, it’s very limited in terms of features—you can only record your entire screen. To record with Gnome:
1) Press Ctrl+Alt+Shift+R to start and stop recording.
2) The recording has begun when you see a red dot in the top right corner of your screen.
3) Recording stops by default after 30 seconds, however you can change this in settings.
4) The file is automatically saved in the User’s Videos folder in WebM format.

How do I record my screen in Fedora?

Gnome3 also has a built-in recorder.
1) Press Alt+Ctrl+Shift+R to begin recording.
2) You'll see a red icon on the message tray in the right-bottom corner of your screen. If the message tray is hidden, press Super+M to activate it.
3) Press the red icon will stop the recording. The video will be saved in the Video Directory on your Home Directory in WebM format.

This recorder is also limited to a 30-second recording time. This makes it impossible to record presentations, tutorials, workflow demos and anything else that requires more than 30 seconds to explain.